This post is also available in: Türkçe (Turkish) Deutsch (German) 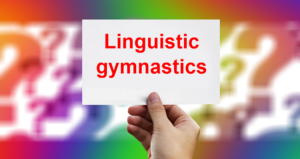 If your school English lessons are lost in the mists of time you probably know what grammar is all about, but what about syntax, semantics, synonyms, antonyms, rhetoric, not to mention punctuation?

Even people who are good at English struggle with some of these things – and imagine what happens when you’ve got all these issues in TWO languages.

Every language comes with a whole bunch of grammar rules and even if you are a native speaker, that doesn’t make you an expert at the grammatical constructions, correct punctuation or even perfect spelling.

When you take the next step to translation of technical data or legal documents and there’s another layer of complexity to deal with.

A legal friend tried to explain the British legal profession’s aversion to commas as ‘ensuring there is no misunderstanding’.  A copywriting friend argues that the punctuation is what makes sense of the words.  This means that our translators have to be linguistic gymnasts, able to translate, interpret and create accurate documents that the reader can understand.

Grammar:  the rules of how a sentence is constructed.  Generally in English it’s:

In German the verb can be partly in the middle – and then the past participle goes at the end of the sentence.

(literally – We were walk going)

Syntax:  This is about how words are arranged to create readable and understandable copy.

There is even a correct order for adjectives in English.  Any descriptive additions to your noun should be ordered – opinion, size, age, shape, colour, origin, material, purpose.  So you can have a beautiful, little, new, pink and white baby, but then you also have to take phonics into account here too – so it can get really complicated!

Synonyms & antonyms:  Synonyms are words that mean the same or similar as the word you start out with.  A Thesaurus is a brilliant tool for this.  Synonyms should not be confused with metaphors.

Antonyms are words that means the opposite of the word that you start out with – a good Thesaurus will list these too.

Homonyms: Words that are spelled and said the same – but have different meanings:  For example, ‘bow’ the result of tying two strings or ribbons OR something you use to shoot arrows from.

Metaphors: These are colourful descriptive phrases that are not intended to be taken literally.  For instance, ‘Pull your socks up’ does not literally mean that someone should pull up their socks, it means that they need to do better.  Other metaphors with a similar meaning would be ‘Get your act together’, ‘Smell the coffee’ – you probably have your own favourites!

Rhetoric: The skill of persuasion and influence in language.  This is often used as a term that describes a speaker, but can equally be applied to written material.

Punctuation:  English doesn’t have accents, but any schoolchild learns that accents abound in French, with acute, grave, circumflex and cedillas.  Then there is the German umlaut and the tilde in Spanish.  And let’s not talk about apostrophes – even the English don’t understand them, so pity the non-English-speaker trying to make sense of them.

So just a very short glossary – but take this and replicate it in another language – then try to match the two up.  It’s not just a case of knowing the word for …, it’s also understanding how it’s used and whether a phrase has an equivalent in another language or if a literal translation won’t actually make sense.

Fortunately, our team of professional translators and interpreters have spent their lives perfecting the link between languages and are experts at linguistic gymnastics!  Call us on +44 1245 216930 for more information.