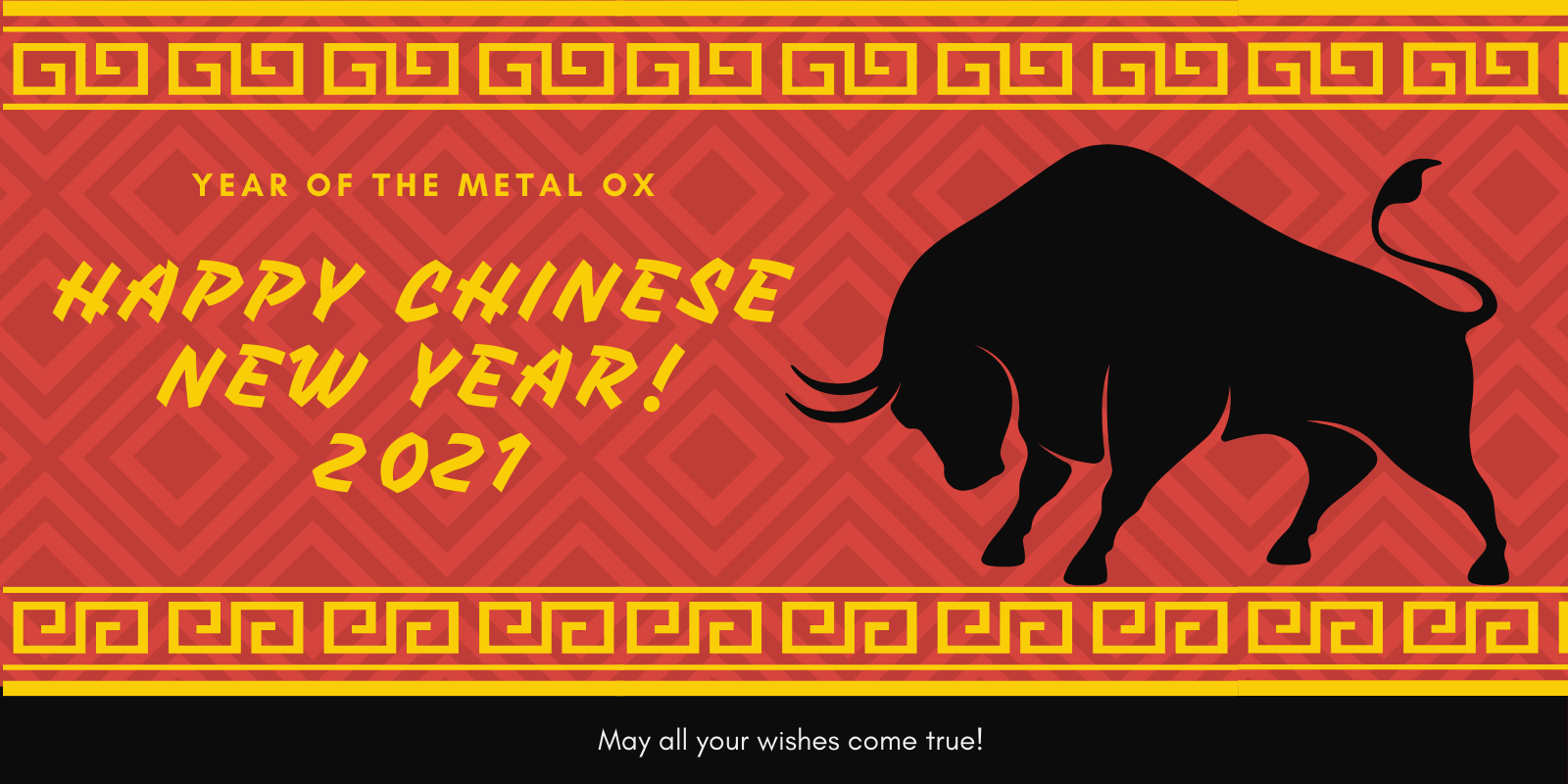 It will be Chinese New Year on 12th February 2021 – and you can be forgiven for thinking this festival was in January as it’s what can be described as a ‘movable feast’. Chinese New Year (or The Spring Festival) is based on a lunar calendar (13 months based on the phases of the moon). Trying to work it out with our familiar solar calendar is almost impossible.

Chinese New Year is rather like Easter. It can fall anywhere between 21st January and 20th February, depending on what phase the moon is in. Easter Sunday falls on the first Sunday after the first full moon after 20th March.

In fact, Chinese New Year is not just one day, but covers a period of just over two weeks.

While the Western world has its zodiac, the Chinese have animals. However, instead of dividing the year into 12 ‘star signs’, the Chinese rotate the animals over a 12-year period. They also have 5 metals – wood, fire, earth, metal and water – which rotate over a 60-year period. Chinese New Year 2021 is the “Year of the Metal Ox”, this has not happened for 60 years. Children born during the year will benefit from traits like diligence, honesty, reliability, stability, perseverance, power, stubbornness and excellence.

The other animals that are allocated to this 12-year cycle are rat, tiger, rabbit, dragon, snake, horse, goat, monkey, rooster, dog, and pig, with ox as the 2nd in this succession coming after rat.

How is Chinese New Year celebrated?

Traditionally it is a time to pray to the gods and ancestors, to set off firecrackers to scare away the monsters (and bad luck), to visit family (and be cross examined about your marriage prospects, career, how much you earn and plans for children) and to eat traditional foods such as dumplings, tangyuan (symbolising reunion), Nian gao (rice cakes) or Fa gao (often dyed festive colours).

The colour red is important and street decorations and clothes will be mostly this colour; new clothes at New Year are meant to be lucky too. Also there are the red envelopes. These are given to children and contain money – a symbol of the passing of wealth from the adults to the children in the family.

While Chinese New Year celebrations begin with firecrackers and fireworks, they end with the Lantern Festival a colourful, but quieter, event. This day is also known as Valentine’s day in China.

Of course, Chinese New Year is celebrated in cities all over the world. If you know of a city where there is ‘Chinatown’ you would be able to see the celebrations like the parades, the lion dancing, fireworks and lanterns – and try out the traditional food, if it wasn’t for the pandemic, so we are looking forward to next year to join these celebrations!

How does Google Translate work?Whether for a French assignment at school or to order a coffee in a touristic trip … END_OF_DOCUMENT_TOKEN_TO_BE_REPLACED

Each country has a different history, a different culture and thus – different traditions. While these traditions … END_OF_DOCUMENT_TOKEN_TO_BE_REPLACED