Home » Preventing the Loss of Life in Fires 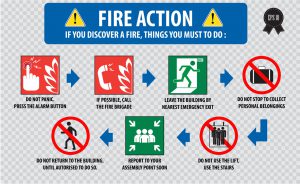 The Importance of Signs in Foreign Languages

Thankfully, most people are lucky enough to never be involved in a fire. A scenario that many of us can only imagine, experiencing a fire can be a traumatic experience, and for some it can lead to loss of life.

For those abroad on business, tourists or foreign visitors, a fire could literally mean life or death – especially if there is nothing in their native language to highlight the way to safety.

Just because we may know what a sign means, it doesn’t mean this is true for people who do not speak English, for instance. Read more about how the loss of life caused by fires can be prevented and why signage in foreign languages is more important than ever.

Why Fire Safety Signs are Important

One of the most important types of signs in a building, the arrows on fire exit signs tell people where to go in the event of a fire – instead of going somewhere else in a blind panic.

Fire safety signs can come as a blessing in fire emergencies. In some countries, it is a legal requirement to have fire exit signs above doors. Some buildings even take the extra step of having fire arrow signs showing the way to the exit door. For those unsure of signs, local fire officers can provide extra information about signs needed in certain buildings. It is important that exits have the words ‘fire exit’ and a fire symbol on them – it is even illegal in the UK to display signs with just the words ‘fire exit’ on them.

With between 6000-7000 languages spoken worldwide, it is impossible to have a sign in every language. However, having fire exit signs in tongues other than English could be beneficial to many people in the event of a fire. For example, Mandarin Chinese is the most spoken language in the world with over 1 billion people in the world fluent in it.

According to the United Nations’ Educational, Scientific and Cultural Organization (UNESCO) the most widely spoken languages after Mandarin are English, Spanish, Hindi, Arabic, Bengali, Russian, Portuguese, Japanese, German and French.

Having a sign in two or more languages for buildings used by people of different nationalities helps to ensure the safety of as many people as possible in the event of a fire.

Fire exit signs are a very important precaution because they can help save lives in the event of a fire. When using them, it is essential to display them in a way that everyone can see and understand, no matter the language they speak.

What languages do you think fire signage should be in? Let us know on Facebook and Twitter.

If you have any questions regarding any of the above, please contact me by e-mail levent@ttcwetranslate.com or call +44 (0)1245 216930 for a no-obligation discussion.

As of 1st July, the European Union will be updating its VAT rules. These updates will impact the shipments between … END_OF_DOCUMENT_TOKEN_TO_BE_REPLACED

5 May, 2021 marked the first ever TTC Freelance Partners meet-up!Due to Covid-19 regulations, we have had our first … END_OF_DOCUMENT_TOKEN_TO_BE_REPLACED